India’s networking market, which includes Ethernet switch, routers, and WLAN segments, witnessed a 13.6% year-over-year (YoY) growth in terms of vendor revenues during the fourth quarter of 2021 (4Q21). With organizations looking to re-open campuses, the investments in the non-DC networking infrastructure have grown significantly over the last few quarters.

Having said this, vendors were still seen to be battling with chip shortages, increasing freight costs, increased import costs due to currency fluctuations. Infrastructure lead times have currently risen to the levels of 26-28 weeks for many vendors and are expected to stay the same for some more quarters to come with the Russia-Ukraine conflict worsening the scenario. However, as vendors are looking to clear their shipment backlogs, IDC expects the next few quarters to have steady market growth as demand for networking infrastructure looks very stable.

After a strong run-up, India’s router market stayed stagnant with 0.1% YoY growth by vendor revenue and sequentially declining by 10.6%. Service providers contributed to 61.4% of the router investments and were primarily responsible for the decline. However, enterprise router investments grew by 25.1% YoY with enterprises investing in routers for regular refreshes and investments that were aimed at deploying solutions like SD-WAN. Apart from telecommunications other key verticals for routing include manufacturing, finance, and services.

The WLAN segment witnessed a marginal growth of 4.5% YoY by vendor revenue. While the enterprise WLAN grew strongly with pent-up demand from organizations coming through, the consumer wireless demand softened with offices reopening and the festival season in India coming to an end thereby posing only marginal growth for the overall WLAN segment. The enterprise WLAN segment exhibited a very strong 45.4% YoY growth and consumer WLAN declined by 22.0% YoY.

Traction for Wi-Fi 6 in Indian enterprises expanded, with Wi-Fi 6 contributing to 75.7% of access points revenues during 4Q21. The demand for Wi-Fi 6 adoption is fueled by the exceedingly increasing lead times for previous generations of wireless access points caused by semiconductor shortages.

According to IDC’s Worldwide Quarterly Ethernet Switch Tracker, the 4Q21 Ethernet Switch market in India stood at USD 163.1 million (by vendor revenue) registering a strong YoY growth of 25.7%. The enterprise investment in non-DC switching grew at a 41.5% YoY owing to offices getting ready to reopen post the third wave of COVID-19. With hybrid work taking precedence, enterprises are also keen on setting up satellite offices in tier-2 and tier-3 cities to promote employee satisfaction which is also increasing the demand for non-DC switching equipment. With the semiconductor shortage situation intensifying, enterprises were keen on clearing their backlogs during 4Q21 to create room for future demand. The DC switching segment grew at 9.3% YoY. Services, telecom, manufacturing, and government were the top contributors during 4Q21. 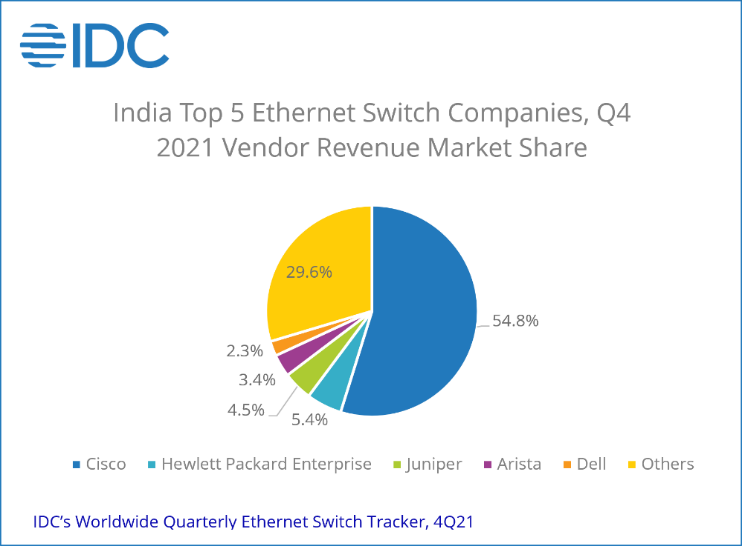 Cisco continued to dominate the Ethernet Switch market with a 54.8% share during 4Q21, followed by Hewlett Packard Enterprise (HPE) and Juniper. ODM business in India had a significant growth during 4Q21 owing to the hyperscaler investments. 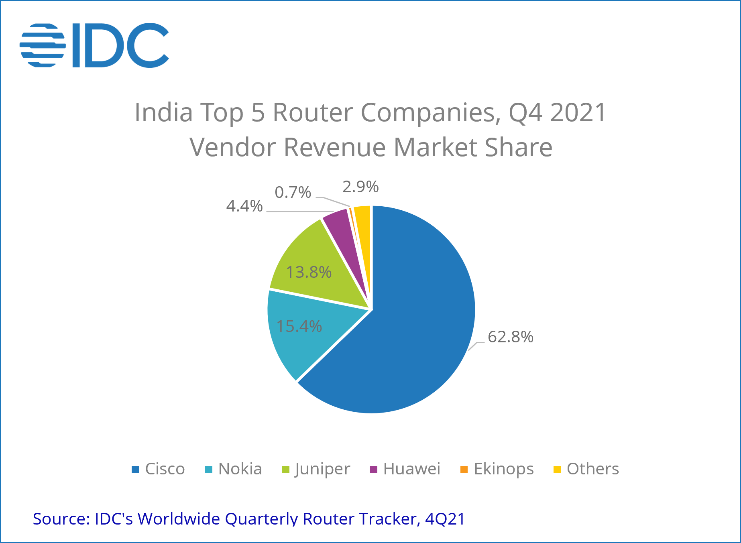 Cisco leads the router market with a 62.8% market share in 4Q21 followed by Nokia and Juniper.

According to IDC’s Worldwide Quarterly Wireless LAN Tracker, the Indian WLAN market had a marginal YoY growth of 4.5% by vendor revenue during 4Q21 majorly driven by the enterprise wireless segment. The market stood at USD 64.5 million (by Vendor Revenue).

Business in the enterprise wireless segment was exceptional with a YoY growth of 45.4% by vendor revenue. The growth was majorly driven by enterprises investing in wireless infrastructure ahead of office opening post the third wave of COVID-19. Vendors were also focused on clearing the existing backlogs caused by chip shortages to be able to efficiently cater to future demand. Services organizations were seen investing heavily on spinning up newer locations primarily focusing on wireless connectivity. Cloud-managed wireless was witnessed gathering stream owing to simpler deployment and management. Investments from the education vertical bounced back after a long slump caused due to COVID-19. Wi-Fi 6 contributed to 75.7% of the access point revenues due to lesser wait times compared to the previous generations of wireless access points.

The consumer gateway router business declined sharply by 22.0% YoY by vendor revenue. The decline in the gateway router segment was due to offices opening in multiple parts of the country and the festival season coming to an end in India. With ISP as the channel, Wi-Fi 6 is starting to get traction in the consumer segment as well. However, the gateway router market is still dominated by Wi-Fi 5 shipments. 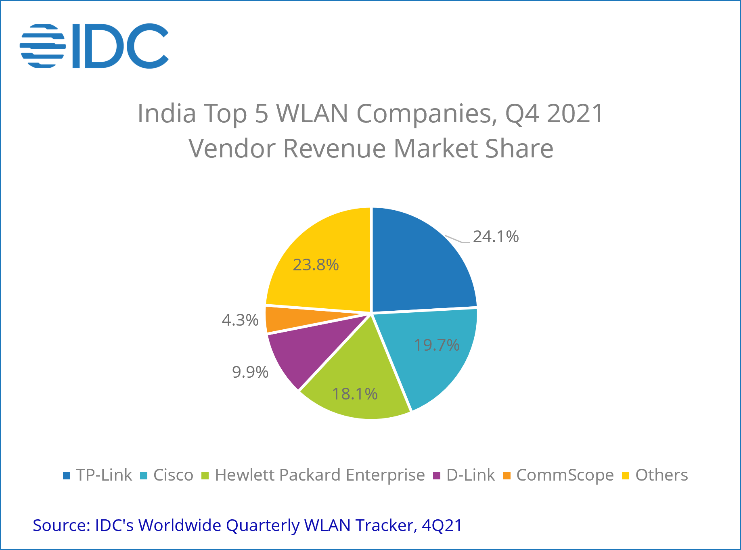 “Though vendors were struggling with operational challenges like ever-expanding lead times and increasing input costs, demand for network infrastructure remained healthy. The market for campus investments – both for wired and wireless business expanded rapidly during 4Q21. Vertical segments like education which did not spend for a considerable period started spending on network infrastructure. Cloud-managed infrastructure was gaining more traction than usual considering the ease of deploying and managing infrastructure specifically in verticals such as services, education, retail, etc. Enterprises are largely beginning to realize the benefit of NaaS as it would help them migrate to an OPEX model without compromising on the quality of service. Network infrastructure vendors are gearing up to cater to specific demands on the enterprises by building easy-to-use management consoles and flexible commercial models as part of their NaaS offerings,” said Sudharsan Raghunathan, Senior Market Analyst, Enterprise Networking, IDC India.

The Ethernet Switch, Router, and WLAN markets are expected to grow in single digits in terms of compound annual growth rate (CAGR) for 2021–2026. Increased adoption of emerging technologies such as cloud, IoT, mobility, etc. would drive incremental revenues. IDC also expects large investments for 5G rollouts in the next couple of years.